This is yet another response to the war of tanks themed blog, For The Record. The site has a bad habit of posting misleading articles which are full of faulty conclusions. This article is no exception. It attempts to discredit the notion that German tanks such as the Tiger or Panther could achieve significantly higher kill ratios against American tanks like the Sherman. The author in question (Priory of Sion) asserts that technical characteristics and crew training were, in fact, not the determining factor in this. He argues that whichever side spotted the enemy first was the one that held the upper hand, and would obtain the higher kill ratio. Since the attackers had to expose themselves, they were usually spotted by the defenders first. There is certainly some truth to this argument, but he makes the error of assuming that this was the most important factor of all in a tank vs tank engagement. Priory of Sion seems to believe that the Panther tank had some deficiency in fire control that made it inferior to the Sherman. He comes to this conclusion by relying on a single questionable source: The infamous BRL memorandum No. 798. As we shall see, these mistakes will serve to largely invalidate his article. 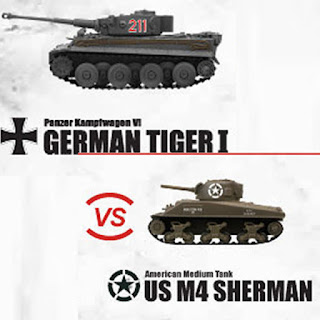 The classic David vs Goliath battle


Origins of the legend

The post starts out with an examination of the notorious dictum that it took four or five Shermans to defeat one Tiger (or Panther) tank. To be sure, the 'Tiger legend' can be found in the memoirs of many WW2 veterans. The tank had a fearsome reputation all out of proportion to the small numbers that were produced. It gave Allied tankers an inferiority complex about their Shermans, and led to many instances of tank terror among the infantry. Many soldiers eventually came to the conclusion that the only way the lumbering beasts could be defeated was to send an entire platoon after just one tank. The TV show, Greatest Military Clashs, even did an episode on the Tiger myth. Annoyed with all the undeserved praise being heaped on the German 'cats', Priory of Sion decides to track down the origin of the 'five vs one' rumor. His investigation (which probably involved no more than a 5 minute google search) leads him to conclude that the legend originated with Belton Cooper. A veteran of the 3rd armored division, who authored the 1998 book called Death Traps. This memoir is particularly hated by teaboos and freeaboos, due to its unflattering depiction of the Sherman tank. Priory of Sion (who we'll call POS for now) throws the blame for the 'five vs one' legend squarely at the feet of Belton Cooper, and asserts that it is a dictum with little supporting evidence.

In fact, a closer look at the historical records show that the Panther\Tiger myth pre-dates Coopers book by several decades. Even if we assume that it didn't actually originate in the Second World War itself, it must have arisen very soon after. More importantly, the legend was echoed by authors with  higher academic standing than old man Cooper. In Janusz Piekalkiewicz' 1986 book, he states: "According to U.S. Army statistics, it cost five Shermans or some nine T-34s to destroy one Panther." [1] That pushs back the date established by POS by 12 years. In his 1975 book, Bruce Culver claims: ''An unofficial rule of thumb in the U.S. Army was that it took five Shermans to knock out a single Panther.'' [2] That pushs back the date by 23 years. But the real nail in the coffin is when you read the memoirs of Henry Giles, who firmly states that: “It took four of our Shermans to equal one of their Panthers and about eight to equal one of their Tigers.” [3] His book was published in 1965. Thats a full 33 years before Death Traps hit the book shelves. When taking that all into consideration, its becomes clear just how far off the mark POS and his conclusions are. The five to one legend wasn't something that Belton Cooper just pulled out of his ass sometime in the 90s: It was already a well established myth by that point.


Overclaiming by the 3rd and 4th armored

In order to disprove the notion that the Panther was superior to the Sherman, Priory of Sion proceeds to bring out his trump card: BRL memorandum No. 798. The sacred document held in reverence by all freeaboos and teaboos. This report summarises numerous tank engagements on the western front during the 1944 period. To come to their conclusions, the BRL used after-action reports from the 3rd and 4th armored divisions. These were the most successful formations in the U.S. army, and were not really representative of the army as a whole. The 3rd AD entered into combat on July 9, while the 4th AD entered into combat on July 17. When the war was finished, and they turned in their unit diaries, researchers were startled at what they read. The 4th armored claimed to have made 847 tank kills, while the 3rd armored claimed to have made 1023 tank kills! That is a combined total of 1870 kills, a really incredible number that stretchs credibility to the utmost. Because the BRL memorandum is based on these kill claims, it is important to explore whether or not they are realistic. BRL memo no. 798 covers a period of August to December 1944. In the interest of fairness, we should assume that the 3rd and 4th armored scored only half their kills during this time frame.

But even with this generous assumption, the American claims still don't add up with the losses actually recorded by the Germans. They wrote off a total of 4973 AFVs on all fronts, a number that includes 2861 tanks. [4] Those are the losses that were sustained by dozens of panzer and panzergrenadier divisions that were fighting in four different theaters: The eastern front, the western front, the Italian front, and the Balkan front. If the BRL memorandum is correct, then it means that fully 18.8% of their AFV losses in that period (935 tanks) were from these two armored divisions! Thats completely absurd. And just to put things into even starker contrast, consider this. Many of the 4th armored divisions claims were made during the battle of Arracourt. They reported the destruction of at least 285 German tanks and SPGs during the battle. [5] But there is a glaring error with this claim... And that is because the Germans didn't even deploy that many tanks during the battle! They only fielded 262 tanks and SPGs at Arracourt, and of that number, only 86 of them were destroyed beyond repair (I.E., write offs). [6] This shows how idiotic it is to make conclusions based solely on unit diarys. Without further verification, they are completely unreliable and misleading. It is now clear that the U.S. army routinely overclaimed the number of tanks they destroyed. 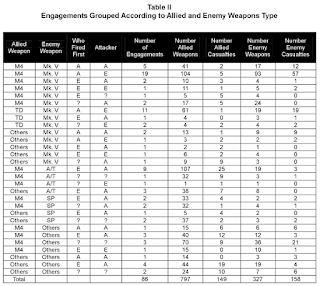 Unverified claims by the BRL

Out of the 86 tank engagements recorded by the two armored divisions from August to December, there were 30 encounters between the Sherman and the Panther. In these battles, the Americans lost 21 tanks, while the Germans lost 72 tanks. Thats a loss exchange ratio of 3.4 to 1. The Shermans were on the defense in 20 of these encounters, while the Panthers were on the defense in 10 encounters. There were also 14 engagements between tank destroyers (TDs) and Panthers. In these battles, the Americans lost 3 tank destroyers, while the Germans lost 26 tanks. These facts by themselves should tell us that something is wrong. In the month of September alone, the 4th armored divisions lost 41 Sherman tanks and more than a dozen tank destroyers. [6] Many of these losses came during the battle of Arracourt, when they faced off against waves of unsupported Panthers. This allows us to make a simple conclusion: The BRL was not recording every single engagement that the two divisions participated in. They pre-selected engagements for their study and cherry picked their data. This observation becomes hard to deny once you understand that they studied a total of 86 engagements, in which only 158 enemy weapons (including 105 Panthers) were claimed as killed. In that same period, however, the 3rd and 4th armored divisions probably made half of their 1870 kill claims.

The BRL was using a form of statistical misrepresentation, because they screened out some of the battles these formations participated in. They only looked at those encounters for which there was firm and reliable data. A valid excuse, perhaps, but one that skews the results. The end result is that it paints the U.S. army in a better light, making them look like some real monsters. So when we examine the table for memorandum no. 798, we have to realise that this is not what the typical outcome of a battle was. It doesn't even make sense that the American tanks could have such a massive advantage simply by being on the defensive. POS seems to rationalise this as a result of the Sherman having far better optics than the Panther, but when you look at the respective telescopes, its obvious that this can't be the case. So how do we explain such an absurd disparity in effectiveness between the vehicles? Simply put, we can't. The only sane conclusion to make is that the 3rd and 4th armored divisions were exaggerating their kill claims, and the BRL was cherry picking what battles they studied. For this reason, the memorandum no. 798s claim that the Sherman was x times more effective than the Panther can be dismissed as uncorroborated nonsense.

[3] The G.I. Journal of Sergeant Giles, by Henry Giles.