Back in march of 2008, david ray griffin released a book which attempted to detail the flaws of the 911 commission report, in a vein similar (but not identical) to his earlier work, distortions and omissions. It is unique among the literature in that no special knowledge of physics or intelligence protocols is required to get value out of it. This was written specifically for the benefit of the congress and press, who have little time to study complex issues, and are reluctant to look into any possible difficultys with the public story (for fear of the 'conspiracy theorist' stigma). It outlines the blatant inconsistencys of the deeply flawed report by organising a series of thrusts, each of which gravely compromise the integrity of the commissions narrative. This is an interesting approach which succinctly demonstrates the inability of the governments formal tale to withstand rigorous, informed scrutiny. Behold:


Below, the summary for each of the books first five chapters will be deposited for the convenience of those who still have the gall to publicly emphasise their support for the 911 commission report. This book has been available for just about five years now, and not one of these clowns has been able to mount a defense against griffins criticisms of their holy text. As long as this status quo remains unchanged, these yellow bellied pseudo-skeptics have NO RIGHT to continue acting as if their views are any more valid than our own. Actually, going by the fact that there has still been no legitimate debunking of the one comprehensive timeline to oppose the 911 commission, one could even jump to the wild conclusion that the narrative espoused by truthers has more credibility! In the end, only time (and further efforts by government apologists) will tell.

-1. How long did george bush remain in the classroom?: These storys suggesting fear at the airport did not, in any case, solve the problem. Indeed, they arguably made it worse. If such fear existed at that time, so that there was concern to get the presidential plane into the air as quickly as possible, why was there apparently no such fear while the presidential party was at the school? Why was the president allowed to linger for a full half hour at the school after it was known that america was, as card put it, 'under attack?' This question was of great concern to familys of the 911 victims. One of the central questions raised by the family steering committee for the 911 commission -as thomas kean and lee hamilton, the chair and vice chair of the commission admit- was: 'Why was president bush permitted by the secret service to remain in the saratosa elementary school where he was reading to children?' Kean and hamilton 911 commission, however, provided no answer. Its only response to this question was to say: 'The secret service told us they were anxious to move the president to a safer location, but did not think it imperative for him to run out the door.' That response implys that the presidents response were limited to (a) running out the door or (b) remaining at the school for another half hour. But there wa a third option: The secret service could have excused the PR session, walked the president out of the room, and whisked him away into the limo. We have here, in fact, an implicit contradiction within the official story: The claim by fleischer and rove that the presidential party feared an attack on the presidents life is contradicted by the secret services indication by its statement to the 911 commission -as well as by its behaviour at the school- that no such fear existed. In any case, we are still left with the central contradiction between the actual behaviour of the president at the school that morning and the account of that behaviour given by the white house -through andrew card and karl rove- on the first anniversary of 911.
-2. When did dick cheney enter the underground bunker?: Why did the 911 commission report contradict the combined testimony of david bohrer, richard clarke, norman mineta, condoleeza rice, karl rove, ABC, the BBC, the wall street journal, and even dick cheney himself (in at least one interview) with regard to the time of cheneys arrival in the PEOC? Why was the testimony of the most important of these witnesses, secretary of transportation norman mineta, not mentioned in the commissions report and not contained in its archived videotape? And why do we have four different answers -about 9:10, about 9:36, about 9:43, and about 9:58- to the question as to when cheney arrived?
-3. Was cheney observed confirming a stand down order?: Obviously, all the alternate accounts cannot be true. And even if the commissions incoming flight story is the only alternative account taken into consideration, it and minetas account cannot both be true. There are, moreover, three reasons to suspect that the most accurate account is the one given by mineta. First, he had no obvious motive to lie. Second, he has recently, as pointed out in the previous chapter, reaffirmed his account, stating that the vice president (along with mrs cheney) was already there when he arrived in the PEOC at about 9:20, and stating that the exchange between cheney and the young man definitely occurred before the attack on the pentagon. Third, the various alternative accounts appear to have been created primarily for the purpose of overcoming the impression, sure to be given by the episode reported by mineta, that cheney had confirmed orders not to shoot down an aircraft approaching the pentagon.
-4. Did cheney observe the land all planes order?: We can perhaps understand that hollywood would take the 911 commission report as definitive, especially given the fact that ben sliney would make a better central figure for a movie than would norman mineta. But surely congress and the press should be more critical, asking why, if both mineta and garvey said that the decision was made by mineta, the commission simply attributed it to sliney, without even mentioning mineta -just as it also obliterated minetas testimony about the events that occurred in the PEOC at about 9:25 or 9:26. If both of these omissions, along with the commissions replacement storys, were due to the commissions decision to falsify the truth about cheneys presence in the PEOC, then getting the truth of the matter revealed would be of prime importance.


-5. When did cheney issue shootdown authorisation?: The 911 commissions account of when vice president cheney issued the shootdown authorisation has been contradicted by richard clarke and several military officers, including colonel robert marr (the head of NEADs), general larry arnold (the head of NORAD within the continental united states), and brigadier general montague winfield (deputy director of operations at the NMCC) - three officers in an especially good position to know. 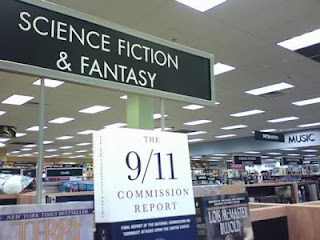 Exactly where it belongs.
These are just a few of the twenty five internal contradictions that festoon the 911 commission report. Clearly, it is with no sense of irony that believers in the OCT continue to denounce truthers as 'mere conspiracy theorists', since the views that they themselves advocate comfortably fit the definition of an outrageous conspiracy theory. It is likely that griffins detractions from the kean committee are a conservative under-estimate, and the ultimate tally of blunders could become far higher if one were to inquire about the various other strange occurrences that bring the official story into question. The global structural failures of three steel framed skyscrapers in a single day, something which had never happened before in history (not even once!). The destruction of the office of naval intelligence at the pentagon, which had just begun an investigation to track down $2.3 trillion in unadjusted funds, which secretary rumsfeld had announced the day before in his beauracy to battlefield speech.
Note:
For any reader who wants the complete list of summarys for all 25 chapters (and other tidbits), you can write drop a request into the comment section. The easiest way to do so is to select the Name/URL option, and just enter a name to satisfy the ID tag.
Posted by kesler12 at 00:42 No comments: