Western civilisation is being rapidly brought to its knees by a variety of social diseases, many of them pushed by zionists. The traditional value systems they once embodied have been undermined by universal implementation of belief systems that have false premises at their core. These include feminism, homosexuality, multi-racialism, and transgenderism. The spread of these toxic beliefs can be linked to numerous universitys and institutes, all of which are owned by major banks. The power of these oligarchs is indisputable: They own virtually all of the politicians, all of the mainstream media outlets, and have friends in the intelligence community and the courts. So when these people make a plan and set an agenda... When they give the marching orders to their allys and underlings, it gets turned into an ugly and unbearable reality for us. This shadow government wants to radically change the social environment that we live in, to disadvantage us and maximise their own gain. These ideologys not only allow them to harvest more money through taxes, fines, and outright confiscation, but also ensure that citizens will be so divided fighting each other that we won't notice the takeover. So what have they chosen as the instrument of our demise?

One of the many reasons feminism was institutionalised by western politicians is because it allows their corporate backers to make greater profits: When women enter the work force, wages can be lowered because of a labor abundance, and wives are free to buy useless and overpriced products their husbands would have refused. In the short term, this gives the governments more taxable labor, and enables them to run indoctrination programs through daycare (which the mother and father will come to depend on, since they are working full time to keep the house running). In the mid term, women begin to demand more and more 'equality', and nations suffer from economic turmoil as employers are forced by quotas to hire many more women than they need. This is a problem because women aren't as productive as men, and their medical costs are higher to boot. When income equality between the genders is achieved, women become more picky about who they partner with. No longer will just any man with a stable job do: They desire the best men they can possibly get, and will refuse to settle for anything less, at least as long as their looks stay untarnished.

This attitude results in most of the female population relying on a small number of alpha males for sexual and emotional gratification, with all the dysfunctions which follow from that. Beta males get discouraged and stop bothering with their women, turning inward for intellectual development, or turning outward to tear society down to its foundations. Careerism and social one upmanship compel young women to put off marriage and motherhood (the only things which are capable of gratifying them in the long run!) until they are past their sexual prime. In the long run, feminism completely alienates the genders from each other, ensuring a massive decrease in the birth rates, and severe dysfunction in what few children remain, as most will come from broken homes with absent fathers and bitter mothers, with no clear gender role for them to adhere to. Societys afflicted by this plague will lose their national identity and cultural ethos, leaving them vulnerable to takeover by foreign enemys. Although the US in particular may not have to worry about an invasion (due to its favourable geography), the body count will remain very high, especially on the female side. 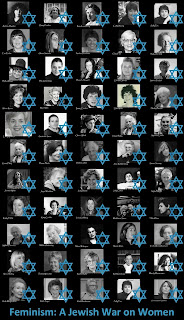 There is a very real possibility that most millennial women will end up unmarried and childless, forced to work into their 50s and 60s at minimum wage jobs to pay off the debt they wracked up during their promiscuous years. Millennial men may decide to forgo marrying these women after they hit the wall, which will put them in a very difficult position. The social and medical costs of elderly women are very high, and since they will not have husbands or familys to look after them, they will quickly become a burden to their society. If america does end up with a huge population of old maids in the next 20 or 30 years, it will be THE major obstacle to contend with. These women will be very bitter, and almost certain to blame men for their predicament. They will spin all kinds of poisonous storys to tell children, and may even demand that the government pay for their living expenses (at a time when GDPs will be smaller than ever!). The only effective response to this female time bomb may be to force them into ghettos, and deny them social and medical care which would otherwise break the bank. It will be a sad end for millennial women.

There is growing evidence that homosexuality is a condition brought about by rape experienced during childhood. If true, then the entertainment industrys celebration of the gay lifestyle would be quite irresponsible, since it would equate their psychological disorder as just an alternative way of living, and this forestall research into a treatment. Whether or not abuse is the actual root cause, thoughtless promotion of homosexuality can have all kinds of unintended consequences. It disintegrates nuclear familys, leads to increased stratification and social fault lines (by the need to implement anti-discrimination laws), and opens the gates to rampant hedonism. Acceptance of the gay lifestyle also engenders a creeping normalcy with regards to sexual moores: After all, if homosexuality was able to go from wrong to right, maybe bestiality and paedophilia can, too? Worse yet, it alienates the men and women with traditional values from the rest of their society, and eventually leads to them withdrawing their support. A nation without hard working and growing familys is a nation doomed to extinction.

The pervasive spread of multi-racialism can probably be chalked up to the oligarchs as another divide and conquer strategy. They know that societys which are not racially homogeneous have poor cohesion and no mutual trust. That is why massive numbers of immigrants from the 2nd and 3rd world are allowed to flood into the country, and form self-contained enclaves that are resistant to assimilation. They rebuke their new countrys traditions and customs, demanding that their own values be given equal precedence, while they live the easy life on welfare and engage in miscegenation. This understandably causes tension with the countrys native citizens, but they are never supported by their politicians, who instead side with the immigrants out of a misguided belief in the virtues of tolerance. After a time, the immigrants are able to exert a stronger and stronger presence simply through their numbers, and society becomes balkanised and prone to infighting. If the influx of immigrants goes on to long, the demographics of the country radically change, and native ethnicitys become a minority in their own homeland.