This is another entry into what is quickly becoming a large catalogue of thoughts on the animorphs series. The first post was an overview of what the storys were about, how they set a high bar in childrens sci fi, and have never really been surpassed in terms of thematic content. I also offered some thoughts I had about certain dilemmas that had plagued readers of the series. The second post was an attempt to determine whether the animorphs hometown had a real world analogue. I was able to firmly prove that the descriptions of their city matched those of ventura, californa. This post will take more of a FAQ format, and answer some questions that were never addressed in the books. Mostly about those big, sciency questions that people tend to shy away from. Alot of this is about the yeerk species, and how they evolved in a biological and cultural manner. When K.A. applegate sat down to wrote the animorphs series, her aim was to provide the young heros with a unique race of aliens to fight against. At first glance, they are your standard group of evil alien parasites trying to enslave humanity, thus yielding the moral high ground to the humans who were fighting in self defense. But as the series progresses, applegate presents the yeerks in an increasingly sympathetic light. Their natural bodies are so inadequate that they cannot see, hear, or do any of the things that humans take for granted. They are a race of cripples that have no choice but to enslave others. 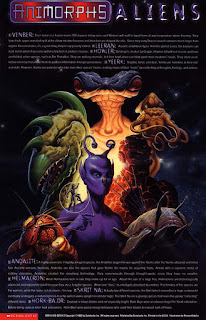 Alien races from the series


How is it possible that a self aware race like the yeerks evolved to become parasites, and control the functions of another creatures brain?

Were they parasites before they became sentient, or were they sentient before they became parasites? This is something that has always perplexed me. Yeerk nature is at the core of the animorphs series, the reason they came to earth and put humanity in their sights. Their parasitic nature is what compelled them to infest other self aware beings, denying them freedom so that they could be free themselves. I have a speculative theory on how this might have happened. While details from the book are scarce, what we do know is that they are hermaphrodites that reproduce through epigamy. Putting it simply, they only reach sexual maturity in very specific conditions, because the metamorphosis is irreversible and reproduction is fatal. During the spawning process, yeerks merge together and somehow 'fuse', and from them emerge juvenile 'grubs.' There appear to be both male and female yeerks, even though they carry both pairs of sex organs. Most importantly, they are an aquatic species that can move through an animals ear canal and into their actual skull, sinking into its every crevice. By attaching their neurons to those of the hosts brain, the yeerks are able to take complete control over their bodys and use them as a puppet. Can natural selection provide a explanation for such a bizarre race? My answer is an emphatic yes.

Before we go any further, though, I would like to posit two separate claims. 1) That the ancestors of yeerks had a 'neural patch' as part of their anatomy. 2) That these proto-yeerks could only reproduce by migrating to some ancestral spawning ground. If both these claims are true, then we can venture the following theory. Like salmon, the yeerks must travel from an ocean up into a river, and hence, swim against strong tides and up into waterfalls. I imagine this would require incredible exertion on their part, and that some of the yeerks wouldn't complete the journey back. If so, then the bottleneck for reproduction is limited to those who can succesfully migrate back to the spawning grounds. Maybe the yeerk ancestors faced a crisis at some point, something which caused the journey to become more dangerous and more difficult? If so, it would hardly be surprising if some of the yeerks managed to cheat and find another way to get upriver... Maybe they swam into the ear canal of some creatures (like the gedd) who were taking a drink, using their 'neural patch' to direct them towards the spawning ground? * This approach would have given the yeerks in question a major advantage over their peers who were trying to swim upriver the hard way. Perhaps it created a selection pressure great enough that the yeerk anatomy changed, so successive generations had a larger 'neural patch' that could take more and more control over the gedd brain? We have seen similar instances of parasitism here on earth.


Did the yeerk empire have conflicting needs when it came to the species they tried to conquer?

Absolutely. After they set up their colony on the hork-bajir world, and their population grew to number in the billions, the yeerks faced a catch-22 situation with regards to their hosts. They have five different classifications for potential host species. Class 1 are those which are physically unfit for infestation. Class 2 are those which are fit for infestation, but suffer from severe drawbacks. Class 3 species are those that would make excellent hosts, but are few in number and can't be bred quickly. Class 4 are those that would make excellent hosts, but are too formidable to conquer. Class 5 are those fit for infestation, are large in numbers and able to breed quickly, and cannot fight back. The existential crisis plaguing the yeerks is that despite decades of searching, they had seen no examples of the desperately needed class 5 species. You see, it all comes down to agriculture. If a species doesn't have agriculture, then its population will number roughly the same as neolithic humans, I.E about 5 or 10 million. This is why the hork-bajir were rated as class 3. Their small numbers and lack of technology made them easy to conquer, but it also meant that they couldn't supply the full needs of the empire. But if a species did have agriculture, then its population would quickly explode in numbers, developing better technology and a state apparatus to manage them. (This usually implys a military) This is why humans were rated as class 5. They were harder to conquer than class 3 species, but also yielded a much greater payoff for the empire.

The huge problem here is that within just a few centurys, a species can go from type 5 to type 4 status, just as the andalites did. Technological evolution would rapidly allow a type 5 species to leave its planet, build an armada of spaceships, and colonize other worlds, which means they are no longer type 5! The central paradox for the yeerks is that the type 5 species they coveted so badly were unstable and transitionary: They were nothing more than a brief period of adolescence that was eventually grown out of. Both the yeerks and andalites believed that humanity was nearing the end of its type 5 status, and would quickly mature into a type 4 species like them. This must have been incredibly frustrating to the yeerks. Even after they had picked a needle from a haystack and discovered earth, they would not get an effortless victory over mankind. Conquering them would require scarce resources that were needed elsewhere. And the situation wouldn't have been any better if they had somehow went back in time and discovered humanity back in the 1800s (when its population only numbered 1 billion). The yeerks would have an easier time conquering earth, yes, but the payoff in hosts would be smaller. It takes about 18-19 year for humans to grow to maturity, and they literally didn't have the time to wait that long. The empire had an immediate need for huge numbers of hosts to stem back the advancing tide of the andalite fleet. It was an unenviable situation for them.


*In the movie avatar, the alien na'vi use a neural cord that can attach to those of other species and control their behaviour. Its an interesting analogue, if nothing else.
Posted by kesler12 at 21:21 No comments: