Something terrible happened a few weeks ago. In south africa, the parliament voted to confiscate property from white citizens without compensation. Land that has been passed down from one generation to the next for over 200 years, in some cases. This was part of an agenda to punish them for the sins of their colonist ancestors, and to appease the angry blacks who make up most of the population. The greed factor is undeniable, too. With this policy, the bureaucrats can acquire prime real estate for pennys on the pound. The black south africans have taken the racist sentiments of its government as free license to persecute the whites. Street violence has increased, and so has mob attacks on farms. This is not a new trend: Its been going on ever since Nelson Mandela took office in 1994. His presidency proved to be a disaster for the country, which has become poorer and poorer over time, while violence has skyrocketed. According to one estimate, there were over 445,000 murders between april 1994 and march 2016. 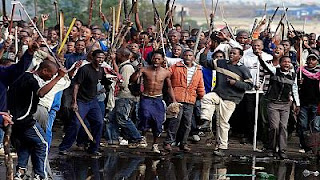 The annual murder rate certainly hasn't abated since then, as the government seeks to maintain its popularity by engaging in more and more flagrant acts of discrimination against the white minority. These absurdly unfair land grabs will leave the people destitute and vulnerable. Its entirely possible that this scenario could morph into full on genocide. The people are stripped of their rights more and more every year, and are in fear for their lives. If a wave of mass murders sweeps the country, then the white south africans have limited options to flee. Tragically, most western nations will refuse to accept them as refugees. This is due largely to self imposed political correctness, and the belief that only 'dark skinned peoples' can be the victims of racism and prejudice. European liberals would much rather virtue signal to each other, and continue bringing in muslims by the boat and plane load. The only 1st world country that seems ready to accept them as refugees is australia.
Posted by kesler12 at 23:56 No comments: