Zionists behind the migrant crisis

This is a pretty simple formula, but alot of people can't seem to grasp it. Israel (and its american puppet) are destabilising countrys in the middle east with their military interventions, and the inhabitants of those nations must then flee in order to survive. The zionists then use their moles inside the UN and EU to promote open border policys, allowing millions of ethnic minoritys to flood into racially pure european countrys. The middle eastern refugees have a completely different belief system, and despise the white people native to the countrys they take shelter in. They refuse to integrate with the rest of the community, setting up religious and racially based enclaves. 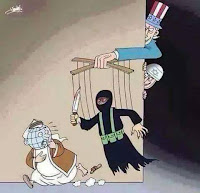 Be afraid... Be very afraid

These quasi-legal immigrants preach hatred against the people whose welfare they live off, and institute a take over by baby boom (outbreeding the europeans). We are already seeing them overtake the natives of sweden, and the terrible consequences this has. But most europeans are too liberal or socialist minded to speak out against these travestys, and do mental gymnastics to avoid rationally looking at the consequences. Unless they stop these open border policys which are demographic suicide, then at some time in the future, there is going to be a race war and ethnic cleansings. Multi-cultrualism is a zionist agenda which has already failed the lithmus test, its just a question of how long before the common man realises it.


Edit: The massacres that occured in paris just 6 days after this post underscores just how unfeasible multi-culturalism is. The french people should have demanded an end to the open borders policy, and began deporting all middle-easterners without proper documentation (which is most of them). Instead, they are holding vigils and waving the #$%ing flag, like that willdo anything. They already had warning signs with the charlie hebdo killings, and now the truth is plainly apparent. If the french people do not begin punishing those politicians responsible for enabling the paris attacks, then they have no future. If france falls to the muslim hoardes, it will soon be followed by the rest of europe.
Posted by kesler12 at 17:06