This is a response to the series of videos released by bantokfomoki on the subject of space travel, as depicted in the avatar movie by james cameron. Bantokfomoki has made four such videos so far, all centered on the performance of the starship known as the venture star. There is alot of good science in them, but they suffer from a certain absolutism. The message he consistently trys to push is that without some kindof reactionless drive, travel to other stars within a human life span is fundamentally impossible. Bantokfomoki is better known by his website EBTX, which stands for Evidence Based Treatment X. He is an expert generalist able to contribute insights on a variety of different topics. With regards to the avatar film, though, he may have jumped the shark.

Bantokfomoki (who we'll call EBTX for now) released his latest video on october 4th, 2014. Referring to the venture stars anti-matter engine, he lays down a premise: ''If it cannot be made to work in principle, then no reaction rocket of any sort is suitable for interstellar space travel.'' Geesh, talk about laying down the gauntlet. EBTX assumes that because this one star ship may not be feasible under one set of mission parameters, it cannot be feasible under any other set of parameters. Thats going to create alot of problems for him down the road: Even if the original specifications are at odds with the laws of physics, they can be altered and rearranged. Playing with the numbers until you get a desirable result is an integral part of what rocket science is!

Now, since this latest video builds upon the work of the others in his series, we're going to do a quick review of them to get up to speed. For the best outcome, readers should watch the videos in their entirety before going over the rebuttal here. The reason for EBTXs detraction of relativistic space travel is that, in order to accelerate to fractions of light speed, the engines will emit so much heat that they would inadvertently vaporise themselves and whatever ship they are attached to. He comes to this conclusion using a different approach in each video, building a cumulative argument that has befuddled most space-exploration advocates. We will check his work for consistency and see whether or not there are easy alternatives to this dilemma.

[1] ...Travel to other star systems in time frames on the scale of a human life span are pure drivel.

He has a very strong conviction of his, as we will see.

[2] Lets first get a picture of what 4 light years really are. Imagine the sun is a pea on a plate in the middle of your dinner table. Then the earth will be a grain of salt at the edge of the table. Jupiter will be about as big as the printed letter o (small case) in a newspaper on the wall of your dining room.

The sheer distances involved with interstellar travel are often under appreciated. The swedish have a series of monuments which represent a scale model of the solar system, the center of which is the erricsson globe: Even at a 1:20,000,000 scale, neptune is located a breathtaking 229 kilometers away!

[3] Since the avatar website doesn't specify a mass, lets assume a mass of 100,000 metric tons for the mass of the craft. Thats the weight of a large aircraft carrier.

If EBTX is referring to its wet mass (I.E, after it is loaded with propellent), that seems like a pretty safe guess. The venture star was, after all, based on the design philosophy laid down by project valkyrie. You can tell because the engines are mounted on the front of the ship, whereas the payload is dragged behind it on a truss. This allows designers to use flimsier materials and skimp on radiation shielding, which results in a very lightweight craft weighing a fraction of what conventional starships would. What we cannot say with certainty is what the venture stars dry mass would be...

EBTX is going over the ships mission profile, which specifys an acceleration of 1.5 gs for half a year. This leads to a delta v (change in velocity) of 210,000 km/s, and a voyage lasting 6.75 years from start to finish. His estimates on the energy consumption are an absolute minimum, since they do not factor in the various inefficiencys that come with reaction engines. With this established, he then moves to the crux of the matter.

[5] But lets suppose that our engine is unbelievably 99.99% efficient, and only 1/10,000th part of our energy will end up as heat to effect our engine. But 1/10,000th part is 1/6th of the energy released by a hiroshima bomb per second. That amount of heat would destroy any conceivable engine in the 1st second.

EBTX doesn't provide any calculations on what the heat capacity of the ship might be, so hes basically just speculating on this. We'll need to do some basic math in order to find out how much heat the engines can handle. Lets start off by assuming that the engines weigh 10,000 tons, and are made of mere carbon steel. This substance has a specific heat of 490 joules per kilogram, I.E, you have to input 490 joules to raise its temperature by 1 celsius. If the temperature before ignition is 0 celsius, and the safe operating limit is 600 celsius, this gives the engines a heat capacity of 2.94 x 10 12 joules. Unfortunately, the heat load from the engines (even at 99.99% efficiency) is 1.05x13 joules, too much to handle. It would seem that EBTX has a valid point. But wait, he didn't merely say that the venture star was unworkable under the circumstances given in the movie: He made the much stronger claim that it was unworkable under any circumstances whatsoever! According to him, a journey from sol to alpha centauri in a human lifespan is out of the question. Well, lets put that assumption to the test.

What we have to do is reduce the velocity of the ship to something more realistic. Instead of .7 C lets try just .07 C, which is 21,000 km/s. By decreasing the velocity by a factor of 10, the kinetic energy (and hence the energy needed to propel the ship) is decreased by a factor of 100. Since the ship is going to be in transit for a longer period of time, we might as well reduce its acceleration by a factor of 10, too. Instead of a 6 month engine burn, the venture star will be accelerating for 60 months. So now, the total energy budget of the craft has been reduced to 2.2 x 10 21 joules, at a rate of 1.4 x 10 14 watts. Thats more like it. And while we're at it, we'll need to ditch the 99.99% efficiency rating EBTX suggested (as a reductio ad absudem), and determine a more plausible rating. Anti-matter engines normally have an efficiency of over 90%, but when you throw room-temperature super conductors into the equation, you can probably get up to about 99% efficiency. If so, that implys the total heat transference would be 1.05 x 10 12 watts. Thats low enough that we don't need to worry about the engines melting, especially when they are being assisted by the radiator panels. Voila, problem solved!

[6] In point of fact, an anti-matter propulsion system is simply ludicrous for high-g accelerations or even moderate ones, because though propulsion by means of electromagnetic radiation alone is the most efficient possible, it does not provide the acceleration produced by throwing out gobs of matter at high speeds.

Thats quite true, which is why the acceleration phase should be drawn out as long as practical. AMAT engines cannot provide nearly as much thrust as chemical or nuclear engines, and they must be given as much time as possible to get a starship up to speed. 60 months is better than 6, in this case. But its curious that EBTX limits his criticism to the venture stars engine (which is only used to decelerate upon reaching alpha centauri, and then to accelerate back to sol), and not to the titanic laser batterys that propel it at the same rate. Does he even know that the ship uses a photon sail?

[7] There is no plan for going to other star systems under the presently known conservation laws in a human lifespan time frame as anything but idiotic.

Such an optimist we are :o)

This (silent) video starts off from a shaky premise. Whereas his previous estimate for the venture stars wet mass was a slim 100,000 tons, EBTX trys to up the scale by comparing it alongside an aircraft carrier. Bizarrely, he suggests that the radiator panels each have as much mass as the ocean going behemoth, whereas the two engines combined are only as massive as one aircraft carrier. Who knows how he came to that conclusion... Adding in the propellant tanks and the tensile truss, he arrives at a final mass of 500,000 tons. But wait, thats not all: EBTX actually has the gaul to claim that this is merely the ships dry mass! There are so many things wrong with that, its hard to articulate. Aircraft carriers are a dense lump of metal that float on water via buoyancy, whereas the venture star is just a spindly rope of carbon nanotubes and containers flying through space. The designs have nothing in common, and its obvious he is just trying to inflate the ships mass. Complementing this deception, EBTX then uses a hopelessly backward method to try and determine how much propellant is needed to accelerate the ship up to 70% light velocity.

Using an exhaust velocity of .693 C (a figure seemingly made up on the spot), and a dry mass of 500,000 tons, he concludes that 500,000 tons of propellant would be required to accelerate the ship to .7 C. But if you input all the numbers EBTX used, this bloated ship would only reach a final velocity of .48 C. A word of caution: In order to correctly use tsiolkovskys rocket equation, you need to know the ships mass ratio and exhaust velocity. You can't just pull numbers out of your a$$. If we return to our previous assumptions about a wet mass of 100,000 tons, and a delta v of 7% light velocity, we can proceed with far more clarity than our host. Using an exhaust velocity of 59,000 kilometers per second (which is what the valkyrie engine was supposed to max out at), we get a dry mass of about 70,000 tons. This means that just 30,000 tons of matter-antimatter propellant are required to get underway, a very comfortable mass ratio that allows lots of safety room. This is important because some of the byproducts in a matter-antimatter reaction cannot be redirected through the engine chamber, and hence cannot be used to generate thrust. 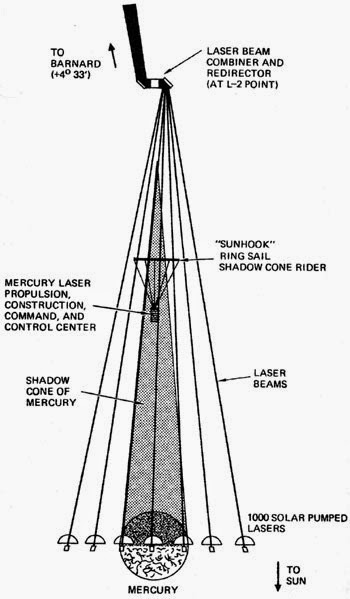