Be wary of neo-nazism

About three months back, StormCloudsGathering released a video that covered the disturbing rise of neo-nazism amongst the patriot/freedom/truth movement. One of the individuals he covered there was andrew anglin, an american white nationalist with a cadre of dimwitted followers. SCG took a damning look at this mans blog, total fascism, and the content posted therein. Anglin proclaims that there is a small population of humans (the jooze) with a genetic prerogative to exploit all non-jews and rob them blind, before setting themselves up as kings of the land. Because of this belief, anglin suggests that the only effective response is to follow in the same footsteps as the nationalist socialist party, by annexing all economic resources within state lines, and evicting all jews regardless of their political affiliation. Let that sink in for a moment: None of his grievances are aimed at the illegitimate state of israel, or the brutal policys of its zionist leadership. Anglins hatred is based not on a persons words or actions, but on their ethnicity.


He is a wet dream come true for the zionist lobby, who have experienced a diminishing level of support amongst the jewish demo graph in recent years. Can you imagine what would happen if herr anglins movement actually went mainstream, and people started following his advice? Groups of skinheads beating up random jews, staging anti-semitic protests, and maybe burning down a synagogue or two? The jewish people would flock back to the likud party, and support whatever insane policy they pulled out of their ass! They would donate far more money to pro-israel organisations like the ADL, WJC, AIPAC, and undermine all the progress made by individuals like ryan dawson, david duke, and anthony lawson. Anglin no doubt knows this, and that further aggravation will set the stage for a 3rd world war. He just doesn't care. YOU SHOULD. Its your way of life on the line! Don't follow some jumped up little dictator on a path to nowhere. Neo-nazism is nothing but an ego-trip for disillusioned, emasculated white boys in big citys. Ignore their blustering rhetoric, and see what is really going on. 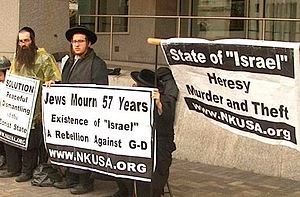 (Zionism is an ideology that threatens all
people, as the neturei karta can attest)

Take a good look at this picture. Jews protesting against israel. Imagine how great the stigma against them would be, and how much courage it takes to resist! Anglin would dismiss them as controlled dissent. We, on the other hand, call them brothers in arms.
Posted by kesler12 at 19:27