TankArchives: 85mm gun vs Tiger I

This article will examine the Soviet tests on the Tiger I tank. Or more specifically, how it was portrayed by a spin doctor named TankArchives. This notorious individual has made a career out of interpreting Soviet military reports and memorandums dating from World War 2. He has a long track record of distorting evidence and making dishonest claims, as part of an agenda to change public perception of the Nazi-Soviet war. As per his blog name, he fancys himself as an expert on all things related to armored vehicles. TankArchives also has a major problem with objectivity. When translating these wartime reports, he just can't help but insert his own dialogue into the middle, drawing his own facile conclusions about what was going on. This habit becomes most jarring whenever he translates Soviet reports on German vehicles. TankArchives never hesitates to use this as an opportunity to 'bash' them for 'design flaws.' His antics were the subject of a thorough rebuttal a few months back.

In that instance, he was making biased, incorrect, and subjective interpretations about the kubinka test on the Tiger II. He tried to mislead his audience into thinking the tanks armor was suffering catastrophic failures, when in fact this was simply not the case. TankArchives omitted to show the photographs that depicted what was really going on. He also grossly exaggerated the effects of the hits and marginalised German armor quality. This article is no exception. As before, we'll look at the exact same report as TankArchives and examine whether or not his claims misrepresent it. The format of this article will be somewhat different from the last rebuttal. Previously, we focused solely on the results of the 122mm test, mainly because it was the first weapon used. That approach wouldn't work here, though, because the 85mm was one of the last weapons tested. Therefore, we'll have to do an overview of the other guns that were fired in the trials. This is actually a crucial piece of context that undermines some of TankArchives conclusions about the Tiger I. 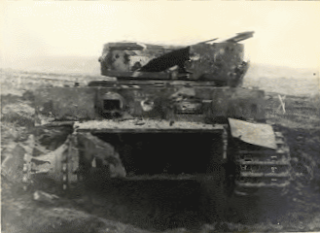 
The firing tests, part one

45mm L66 gun: Nine shots were fired against the side of the turret and side of the hull, from a range of 100 to 500 meters. Six of them penetrated.

57mm L73 gun: A total of ten shots were fired against the side and front of the hull. Three of them managed to penetrate. We'll examine these in more detail.

-Shot #1 was fired from 800 meters against the hull side: It penetrated.

-Shot #2 was fired from 1000 meters against the cupola: It penetrated.

-Shot #3 and #4 were fired from 1000 meters against the hull side: One shell penetrated, and one shell left a dent.

-Shot # 5, #6, and #7 were fired from 1450 meters against the turret side. None of the shells penetrated, and instead left only dents.

-Shots #8, #9, and #10 were fired from 500 meters against the hull front. None of the shells penetrated, and instead left only dents. A weld seam is also burst. 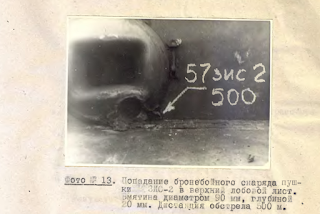 57mm Mk IV gun: Six shots were fired against the side of the turret and side of the hull, from a range of 625 to 1000 meters. Three of the shots penetrated.

75mm M3 gun: Seven shots were fired against the side of the turret and side of the hull, from a range of 400 to 650 meters. Five of the shots penetrated.

76mm L42 gun: A total of eleven shots were fired against the side and front of the hull. Regular AP shells were used, in addition to HVAP shells. Astonishingly, none of them managed to penetrate (!). We'll examine these in more detail.

-Shot #1 and #2 were fired from 650 and 400 meters against the hull side and turret side. Both failed to penetrate.

-Shots #3 and #4 were fired from 200 and 500 meters against the turret side and hull side. Both failed to penetrate.

-Shots #5, #6, and #7 were fired from 500 meters against the hull front. All three failed to penetrate, and left only dents. 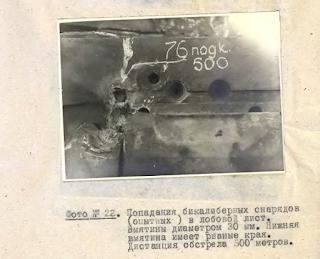 In this part of the trials, the Soviets fire two different weapons against the Tiger tank. The 75mm L55 gun, and the 85mm L55 gun. We've finally gotten to the main event, the entire point of this article. The Tiger I has been quite badly shot up by this point, but has held up quite well to the abuse. This part of the test is when the frontal armor is finally penetrated.

76mm L55 gun: Six shots were fired against the side of the turret and side of the hull, from a range of 500 to 1450 meters. Only one of the shots penetrated.

85mm L55 gun: This is the more interesting part of the trials. A total of six shots were fired at the side of the turret and front of the hull.

-Shot #1 was fired from 800 meters against the turret side: It penetrated.

-Shot #4 was fired from 1000 meters against the lower front plate: It penetrated.

-Shot #5 was fired from 1500 meters against the upper front plate: It left a large dent, but did not penetrate.

-Shot #6 was fired from 1500 meters against the lower front plate: It hit next to the previous shot and broke a piece of armor loose. 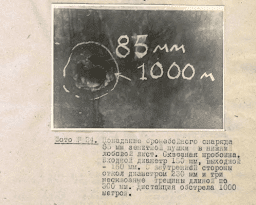 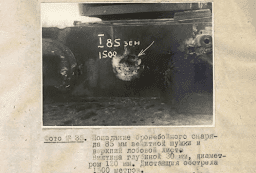 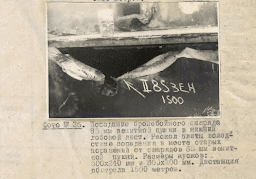 Conclusions about the firing test

So, what can kindof conclusions we take away from the tests? Well to be frank, the methodology of the Soviets is bizarre. They used eight different weapons and fired a total of 60 shots at the Tiger I. * They even used guns from Britain and America, in a test of questionable relevance. They also showed a myopic focus on the side armor. They only tested three weapons against the frontal armor, and two of them (the 76mm guns) proved completely helpless. And yet, that didn't seem to alarm the Soviets at all.

Rather than extensively test their most powerful weapon against this formidable tank, they were content to only fire three shots at the Tigers front! It makes no sense. They didn't even test the armor of the turret face! They merely fired at the upper and lower front plate. One can't help but get the feeling that they had tunnel vision. The Soviets didn't even bother to fire a second shot at the UFP, after the first shot failed. They did that for the LFP, but not the UFP! The entire trial was marked by a lack of curiosity bordering on negligence.

The true effectiveness of the 85mm S53 gun is hard to determine. These tests show that it could penetrate the Tiger Is glacis from 1000 meters. However, subsequent tests showed that it was unable to penetrate the turret face from 400 meters. [1] While the gun was nearly as powerful as the vaunted 88mm L56, it had serious problems with ammunition quality. Wartime Soviet shells did not use armor piercing caps to soften the forces of impact on themselves. The projectiles also had a brittle and soft nose which gave them a bad tendency to shatter against armor at close range. [2] As a result, they had a rather narrow envelope from which they could effectively penetrate.

The cracking of the Tigers LFP is an interesting effect. One of the weld seams had already been burst during the 57mm test. And once the 85mm was fired at it, this was the last straw that broke the plate. The location of the hit was likely a factor, too. Shot #6 not only landed next to shot #4, but it also hit near the edge of the plate. The vulnerability of the LFP became clear in previous tests with the 57mm gun, when the it was suffering greater damage than the UFP. This plate was a definite weakpoint, and was regarded as such by the Germans themselves. Thats why crews would insert pieces of track on top of it, in order to provide extra protection.

In the previous article, it was noted that TankArchives has a poor grasp of metallurgy and ballistics. He looks upon any instance of brittle behavior in the armor plate and chalks it up to nothing more than low quality. He didn't understand that the kind of ammunition being used will influence how the armor reacts. British, American, and German weapons all used capped shells which defeat armor through ductile hole growth. Soviet weapons used uncapped shells which can only defeat armor through brittle fractures. TankArchives has consistently ignored how differently the test vehicles will perform when fired at by different types of ammunition! **

Another thing that must be mentioned is the dishonest manner in which TankArchives presents these tests. At no point in his article does he tell the audience that the Tiger had already been shot at dozens of times by a bunch of different weapons, and had held up to the punishment remarkably well. In fact, its much worse than this: He actually hides the results of some of the trials! He wrote at least five articles covering the tests on the Tiger I, and not one of those articles mention the tests involving the 76mm L42 or 76mm L55 gun. Thats his dirty little secret. The main weapon used on the T-34\76 tank, and the main field gun of the Red Army, was completely useless against the front armor of this tank.

This is a shocking omission that really throws his objectivity into question. When covering these ballistics tests, he only reported on the guns that managed to successfully pierce the tanks armor. In trials where the gun failed to make a significant impression, he simply refused to report on them at all! TankArchives is clearly a biased author who has an agenda of making German tanks look as bad as possible, while making Soviet weapons look better than they really were. His work is marred by dishonesty, exaggeration, and outright lies.

*And thats not counting the huge 122mm L46 gun used at the very end of the test!

[1] Demolishing the Myth: The Tank Battle at Prokhorovka, Kursk, by Valeriy Zamulin. (Page 433)