This article will examine the Soviet tests on the Tiger II tank. Or more specifically, how it was portrayed by a spin doctor named TankArchives. This notorious individual has made a career out of interpreting Soviet military reports and memorandums dating from world war 2. He has a long track record of distorting evidence and making dishonest claims, as part of an agenda to change public perception of the Nazi-Soviet war. As per his blog name, he fancys himself as an expert on all things related to armored vehicles. TankArchives also has a major problem with objectivity. When translating these wartime reports, he just can't help but insert his own dialogue into the middle, drawing his own facile conclusions about what was going on. This habit becomes most jarring whenever he translates Soviet reports on German vehicles. TankArchives never hesitates to use this as an opportunity to 'bash' them for 'design flaws.'

The Soviet tests were conducted at kubinka, in November 1944. The temperatures on that day were -10 celsius, which may have adversely effected the ductility of the armor. This must be kept in mind when examining how the armor reacted to these strikes. In this article, we'll look at the exact same report as TankArchives and examine whether or not his claims misrepresent it. We'll also look at some photographs that were provided in the report and make conclusions based on what they show. This will provide a contrast to the one sided reporting of TankArchives. An example of this is how, at the start of his article, he throws objectivity out the window and presents a picture of the Tiger II tank from after the trials were over... After it had been fired on by 122mm, 100mm, 152mm, and 85mm guns. An intelligent and objective reader immediately gets put off by this. 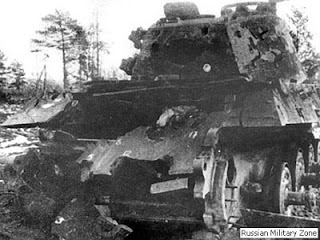 
Specifications of the armor and gun

The 122mm gun came in two different models, the A-19 which has an L/46 barrel, and the D-25T which has an L/43 barrel. The former was a field gun, the latter was used by tanks and assault guns. The A-19 model had slightly higher performance, and was the variant used in this test. According to the 50% criteria, it could pierce 212mm of armor at 100 meters, 200mm at 500 meters, and 182mm at 1000 meters. [1] This was when using the BR-471B shell, which had a ballistic cap (basically, a windscreen that improved its aerodynamics). The regular BR-471 shell had no cap, and somewhat lower penetration.


The firing tests, part one

In this test, five shots are directed against the upper front plate (UFP).

Shot #1 is an HE shell against the UFP, from 100 meters. The only damage is a shallow scuff mark, and burst weld seams. There was some spalling as well. TankArchives crows about the results, saying the shell has literally torn the tank apart. Which is utter nonsense, as the glacis itself is clearly still intact.

Shot #2 is an AP shell against the UFP, from 2700 meters. The impact left a shallow scuff mark, but did no damage. TankArchives is disappointed by the result and has little to say.

Shot #3 is an AP shell against the UFP, from 500 meters. The impact left a deep scuff mark and caused spalling. TankArchives crows about the results, lecturing about the perils of 'overhardened armor.'

Shot #4 is an APBC shell against the UFP, from 600 meters. The impact actually makes a clean penetration. TankArchives crows about the results, saying the 'low quality' of the armor has let the crew down.

Shot #5 is an APBC shell against the UFP, from 700 meters. The only damage is a shallow scuff mark, and burst weld seams. TankArchives crows about the results, lecturing about the perils of 'overhardened armor.'


Whats interesting about the original five shots against the glacis plate is that only one of them (shot #4) actually managed to penetrate. All the others failed to do so and only caused secondary damage through spalling or whatnot. Shot #4 and #5 used a brand-new APBC shell, called the BR-471B, which has superior performance to regular AP. And yet, there are oddities in the results that TankArchives pays no heed to.

Does he notice that while shot #3 pierces the armor, the shell doesn't actually pass into the tank? Nope. Does he notice that the 100 meter range difference between shot #3 and #4 was enough to render the APBC shells ineffective? Nope. Hes is clueless and ignorant as ever. Despite claims to the contrary, it seems that the Tiger IIs glacis plate is actually very tough, and holding up quite well to the abuse.

Also, do you see the boisterous manner in which TankArchives reports on these firing tests? He isn't conveying them in an impartial or unbiased tone. Hes literally cheering from the sidelines like a drunken football fan, ranting about the 'inferior' German tanks and their 'brittle' armor. And he wonders why people don't take him seriously, or dismiss his work as propaganda? It would be funny if it wasn't so ridiculous. 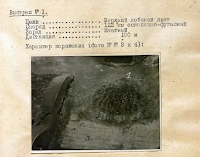 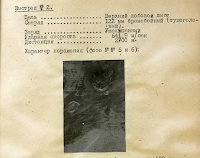 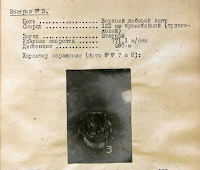 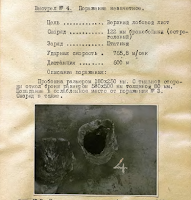 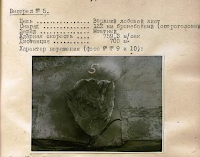 Shot #6 is an AP shell against the LFP, from 2500 meters. The impact left a shallow scuff mark, but did no damage. TankArchives is disappointed by the result and has little to say.

Shot #7 is an AP shell against the LFP, from 600 meters. The impact left a shallow scuff mark, but did no damage. TankArchives is disappointed by the result and has little to say.

(After this, there is a big gap, as the Soviet testers switched to other guns and fired at the tank. They used 100mm, 152mm, and 85mm guns. Testing then resumes with the 122mm against the Tiger IIs turret, which is already damaged from prior impacts)

Shot #34 is an AP shell against the turret face, from 2500 meters. The shell hit next to a previous shot and knocked a piece of armor loose. TankArchives crows about the results, lecturing about the perils of 'overhardened armor.'

Shot #35 is an AP shell against the turret face, from 3400 meters. The shell cracked the armor, but otherwise did no damage. TankArchives is disappointed by the result and has little to say.


In this firing sequence as well, there are certain oddities. The 122mm gun actually made four shots against the turret face (#32, #33, #34, #35), but TankArchives chooses to only report on two of them (#34, #35). Who knows what his reason for doing this are? The true value of this sequence is questionable, anyway, since the turret has already been damaged by previous shots.


Conclusions about the firing tests

So, what can kindof conclusions we take away from the kubinka tests with the 122mm gun on the Tiger II? First, the regular HE and AP shells cannot pierce the glacis plate, they can only cause spalling or whatnot. Second, the brand-new APBC shells can only pierce the glacis plate from relatively short range (600 meters and under). Third, all the shells mentioned will perform better against the thinner armor of the turret face.

But when tested against an armor plate sloped at 50 degrees, the results are quite different. At 100 meters distance, the 88mm APCBC can only pierce 106mm of armor, while the 122mm APBC can only pierce 120mm of armor. For some reason, the Soviet shell performs better against highly sloped armor than the German shell. This is likely due to the T\D ratio, the thickness of the plate compared to the diameter of the shell.

As for the behavior of the armor plates themselves. The fact that they suffered from spalling and burst weld seems is not completely surprising, given the size of the impacting shells. Another factor is that Soviet ammunition did not use an armor piercing cap to soften the forces of impact on themselves. [3] For this reason, they can usually achieve penetration only by exceeding the shear strength of the plate itself. They defeat armor by brittle fractures, rather than ductile hole growth. 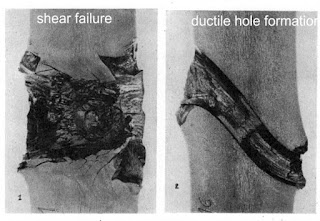 There are a number of problems that loom over all the articles written by TankArchives. One of them is that he is clueless about metallurgy and ballistics. He seems to labor under the delusion that any time the armor doesn't reject the shell with zero damage to itself, that this is somehow indicative of low quality! This is complete nonsense because even high quality armor can fail when subjected to powerful enough attack. He doesn't understand that just because the armor suffers a brittle fracture doesn't automatically mean that its defective.

Another thing that escapes his notice is how differently the Tiger IIs armor behaves when attacked by German and Soviet shells. In addition to the 152mm, 122mm, 100mm, and 85mm guns, the kubinka tests also featured the 88mm and 75mm guns. When fired on by the latter two weapons, the 'brittle' plates suddenly don't act brittle. They experience ductile failure modes, because they are being hit with capped ammunition. TankArchives has complete tunnel vision: He cannot fathom the idea that the impacting shell also influences how the plate behaves!

Another problem is the tone in which he interprets these test results. It is clearly done in the style of someone who is an ultra-nationalist and historical revisionist: Someone who has no interest whatsoever in impartiality. TankArchives comments are reminiscent of the dialogue box in God of War, when you score points from racking up combos. "Vicious!" "Sadistic!" "Savage!"; "Inhuman!"; "Bloodthirsty!"; "Relentless!"; "Merciless!" He isn't even analysing the results, hes just turned himself into a human laugh track.

He presents his claims in such an absurd manner that an intelligent and objective readers simply shake their head in disgust and stops reading... Which leaves only the unintelligent or subjective readers remaining. Exactly the kindof audience TankArchives wants! Its a brilliant example of nigerian phishing. As wikipedia points out in this article: "By sending an email that repels all but the most gullible, the scammer gets the most promising marks to self-select." You have to give him credit for that, at least: He knows the market.