Can a modern army take a WW2 army? This is the question we've never bothered to ask with all the narcissism surrounding our war fighting capabilitys, and how they have supposedly made quantum leaps over the decades. Recent literature indicates that in spite of the surge in some of our technical abilitys (including air power, logistics, smart bombs, networked C3I), there has actually been a net decline in our war fighting capabilitys at large. There are many tactical idiosyncrasys which could illuminate why this is, but they are highly specific to each army, and would not have much importance with a broad overview like this. Rather than naming a specific army from each time ficton and putting them up against each other (which would be too vulnerable to nitpicking), we will avoid such an approach in favour of identifying the tactical and technical trends in each force: That means no nuclear ordnance, and no biological or chemical weapons! Such a setup allows us an opportunity to see how rusty our armys have become as measured against their WW2 peak.

In terms of infantry quality, they are nearly equal. Assault rifles, body armour, night vision goggles, and lightweight equipment give us the edge, but its far from a decisive one. WW2 armys benefit from using full power rifle, carbine, and machine gun ammunition (with a commensurately higher stopping power and barrier penetration), as well as man and vehicle mounted flame throwers for breaking sieges, and immediate support from infantry guns. These are rather short ranged cannons which perform both direct and indirect fire missions, something that neither mortars or shoulder launched rockets together can do. Also, it bears keeping in mind that the seeming advantages of the moderns may be illusory. For instance, merely wearing body armor does not ensure your complete safety from small arms fire, even if the vest is technically up to the job. After all, many gunshot injurys afflict the limbs and the head (especially if the soldier was behind cover before he was shot), and even if hit directly in the torso, the blunt force of the impact is usually brutal enough to take the soldier out of the fight and render him non mission capable. That is just one example of many. Remember, there are no guarantees in a fight!

In terms of infantry quantity, however, the moderns lag far behind. The WW2 battlefront was simply gargantuan. At its peak in late 1941, the german army was employing 154 divisions, 115 of whom were infantry! (This was just what they sent aganst the russians, BTW) At its peak in early 1945, the US army was employing 90 divisions, 70  of whom were infantry... For comparison, the modern day german army has just 6 brigades, while even the US army -the 4th largest in the world- only has around 45 brigades. Modern brigades essentially serve the same role that a small division used to, so it would not be unfair to measure them in a one on one fashion. This being the case, we can see that germanys military is about 1/40th its previous size, while the US military has easily been cut in half. That is a very discouraging force ratio which could have all kinds of negative consequences for us, beyond simple attrition. Josef stalin put it best: 'Quantity is a quality all of its own.' Without very favourable terrain, or constant shock action, a 10 fold disparity in numbers makes it virtually impossible to wage a pitched battle. This would be bad enough on its own, without the additional complication of most of our infantry being located in mechanised or motorised (rather than foot mobile) units.

Such restrictions mean that modern armys would not be able to maintain a continuous front line. Strategically and operationally speaking, they would instead be left to roam about in large battle groups, while the OPFOR flooded around them in a situation akin to moses and the red sea. That is not good. Strategic mobility would be servely impeded, supply lines would be smothered, encirclement would never be more than a breath away, and COs would be shitting bricks... But these concerns can be waved aside for now, since this posts intention is only to examine the tactical finesse of these two separate militarys. Even so, this still leaves us with the daunting prospect of 1 modern brigade facing off against half a dozen or more divisions! At this point, some would undoubtedly try to bring up the issue of the US militarys high kill ratio in combat, which might be an adequate compensation for their numerical disadvantage. We must caution that in war, however, victory depends largely on whether or not you are able to achieve stated objectives, not on whether you kill a large number of enemy soldiers. Putting that more simply, attrition can only be a means to an end, not an end in itself. Accepting that caveat, however, it might still be possible for the moderns to level the playing field by copying the strategy of the german army at verdun, and utilise their artillery in an effort to bleed the opposition white and degrading their readiness for future engagements.

Now, lets move onto armor. WW2 tanks, of course, have no hope of defeating MBTs in anything remotely resembling a straight up fight. Their progeny are not only faster, but more heavily armed and armored. They can fire accurately while moving at speed, and their long rod penetrator shells would bore a hole clear through a vehicles armor and ignite everything inside. A sherman or t-34 would only have a chance at destroying MBTs by creeping up on them at close range, and taking a shot at their rear armor, a tall order for most tank crews. Infantry forces would be even worse off, since their most popular anti-tank weapons (the high caliber rifle or shaped charge warhead) wouldn't be able to penetrate even the thinnest plates of armor. Even so, the advantage of having tanks which can roam about the battlefield nearly unopposed is diminished if our infantry, engineers, reconnaissance and support troops cannot do the same. In a way, combined arms practise is detrimental to any MBTs attempting to rampage behind enemy lines: If or when they shatter the enemy through shock effect, the armored column would not be able to pursue them and exploit their success to the fullest.  Instead, they would be forced to stay behind and create a working environment for the reserve forces, mopping up enemy troops along the way. Moreover, these vehicles can still be disabled and/or destroyed by anti-tank mines, as well as fire from 6 inch howitzers. Clumsy pieces to manager into position, to be sure, but a direct hit could potentially blow the tanks turret off, due to the shells combination of explosive filling and sheer momentum.

That is the rundown on how a modern armored brigade might fare against a WW2 formation. But obviously, theres no need to do the reverse, since WW2 armored divisions are composed of such flimsy vehicles. Theres no way they could even remotely threaten us... Right? Well actually, since our armys have NO dedicated anti-tank formations, its fairly likely they could. Some would undoubtedly object to this statement, pointing out any number of ATGMs and PGMs in use, but that would be missing the point: We have various weapons systems that are capable of destroying tanks, but which do not have the benefit of being structured into a relevant command structure. As jim storr said: 'Anti-tank weapons destroy tanks, while anti-tank troops protect units and formations.' Thus, the moderns will have have no shield to protect their body from an attack that comes via a column of shermans, or panzer 4s, or t-34s, or churchills. In fact, most mechanised/armored brigades as a whole suffer from deficient security in their flanks and rear, due to their increased reliance on a small number of major weapons systems (which are spread thin in a vain attempt to provide both offense and defense). This is important to keep in mind, because the main purpose of a tank is to penetrate enemy rear areas, and bring cannon + machine gun fire to bear on soft targets. And a 75mm tank gun, puny as it is compared to the 120-125mm long barrels of the modern MBTs, is still capable of destroying most anything that pops up on the battlefield. 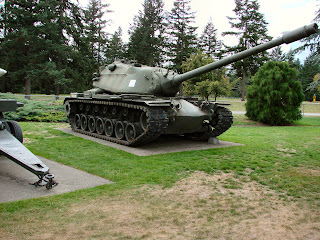 Artillery. WW2 divisions have a much more diverse array of artillery than us. Although heavier and less capable than our guns, commanders aren't restricted by the one caliber fits all syndrome that has afflicted modern forces, with our clear predilection for 155mm weapons. They generally have four to choose from: 75mm, 105mm, 155mm, and 203mm. Decent weapons that work well within their respective niches, rather than being bent out of shape to function as an unrealistic all purpose piece, which is more than we can say. Precision guided munitions are useful, but they are also expensive, and not available in great quantitys. For regular battlefield use, PGMs probably aren't even needed -other than for fleeting or high value targets- seeing as the precision of modern guns is already so far beyond that of their WW2 peers. Given sufficient forward observation, they can be expected to be extremely accurate, dropping shells right on top of the enemy. With the first barrage. The super long range of todays howitzers will also prove helpful in the defense, since artillery has always been the primary backbone of a thin defensive line (and our forces WILL be spread very thinly). Unfortunately, these advantages might not impress an enemy which has so many pieces of artillery as to group them into independent divisions (!). Our shell stocks will also not be up for a protracted conflict, unlike the WW2 nations whose ammunition reserves had been brought up to peak levels, by virtue of having the time to dial their industry up to the task.
Airpower. This has two components, fixed and rotary winged aircraft. Modern helicopters will be put at high risk from the WW2 armys unusually heavy concentrations of AAA, quantitys which just aren't seen on todays batlefield. They may not have the advantage of radar guidance, but like all artillery of this period, they are available in a wide range of different calibers and effective ranges, which would make a helicopter squadrons navigation across active battlefields a nightmare. Modern fighters would presumably have a field day against their WW2 adversarys, although they will be heavily outnumbered, and had thus better not get shot down or waste ammunition. In the long run, jet fighter squadrons may not be able to maintain the necessary sortie rate and operational tempo to keep the enemy on the defensive, by virtue of their typically low mechanical reliability and small numbers. On other fronts, close air support and interdiction craft would be right at home in this environment: They are superbly well designed and capable in their niche roles (although only the americans field a really substantial number of them), and operating in target rich theaters like this are exactly what they were built for. Of course, this also holds true for their enemy, some of whom fielded a ground attack force with many thousands of aircraft!