The military is no place for transgenders

Theres been alot of biased media coverage on the issue of transgender soldiers in the military. The articles published on this topic have ranged from mediocre to pathetic. One of the more groan worthy examples was released by the Washington post, which took issue with Donald Trumps claim that the acceptance of LBGT troops would harm social cohesion in the military. The hack writers were so confidant about the validity of their position that they actually had the gall to begin lecturing readers about 'myths' that supported Trumps positions. Its pretty astonishing that journalists think they can jump into this realm and begin throwing around their opinions as facts, while demonstrating that they have no grasp whatsoever of military affairs.

So what exactly did they say? Heres a quote: ''But these statements rely on two myths: that diversity reduces unit cohesion, and that unit cohesion enhances military effectiveness. In fact, there is little evidence for either.'' Haha. So right from the outset, the Washington post goons commit themselves to a 2 pronged attack that has no hope of succeeding. They could have went about their rebuttal of Trumps in any number of easier ways. They could have accused the president of being biased or prejudiced, but instead, they decided to attack a well supported theory that Trump leans on for support. The things that these writers denounce as 'myths' are actually nothing of the sort. Lets take a look at their attempted refutation. 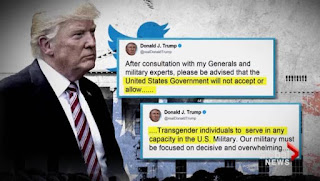 This was the only tolerable and professional choice

Experience and research debunk the claim that uniformity among members is required for cohesive groups to form.

You're spouting utter nonsense. The most exhaustive works we have on the subject of primary groups all conclude that 'diversity' among primary groups is harmful to their cohesion. According to authors like William Henderson, the soldiers in a unit must have a common race, religion, language, and culture in order to co-operate with high degrees of efficiency. Uniformity is therefore very much required.

A post-World War II Army survey about the experience of units that received black infantry replacements after D-Day found 80 percent of white officers and 96 percent of white NCOs stated that black and white soldiers had gotten along very well or fairly well.

So what? Black and white soldiers being nice to each other when off duty or in non-combat situations is all well and good. But it doesn't give much indication of how well these soldiers would function together as a unit when placed in an intense, stressful battle. It is an empirical fact that mixed-race units tend to 'fracture' in combat more quickly than a same-race unit. The 'survey' you cited doesn't refute this consensus.

The reason is simple: The heterogeneity of a group’s members is unrelated to its cohesiveness.

Thats completely untrue, because studys have shown that there is a major correlation between heterogeneity and low unit cohesion. The correlation becomes even stronger when you introduce greater levels of heterogeneity. To put it simply, if the unit contains soldiers of a different race, then cohesion will inherently decrease as a result. If the soldiers are of a different religion and culture, on top of that, then cohesion will decrease even further.

The argument that cohesion is crucial to a combat unit’s performance has its roots in an article written shortly after World War II by two University of Chicago sociologists, Edward Shils and Morris Janowitz.

Yes, they were both early advocates on the theory of primary groups. But their work has been improved upon by a number of different writers, including William Henderson. So try not to fall into the same trap that creationists do. Namely, their belief that nitpicking and 'disproving' Charles Darwin is a substitute for a refutation of the theory of evolution. This is a fallacious approach because scientific theorys tend to branch out and expand with time.

Furthermore, as the historian Omer Bartov has shown, German casualties were so massive that combat units were quickly annihilated, meaning that primary groups hardly had time to form, much less motivate men to fight.

Are you trying to imply that because the soldiers in questions didn't train together, that they were unnable to form primary groups? If so, then you're wrong. These units were all composed of soldiers from the same military district (wehrkreise). They hence had a common race, religion, language, and culture. You have no basis to suggest that they had low cohesion. Even if the men hadn't trained together, they had the homogeneity needed to form a primary group.

None of this scholarship supports the contention that small-unit cohesion improves battlefield performance.

You are mixing apples and oranges here. There are a wide variety of human factors that contribute to a units effectiveness in battle. There is cohesion, nationalism, discipline, rewards, punishment, etc. Even the type of war being fought can influence a soldiers state of mind. How did you come to the conclusion that these other factors are of such pivotal importance that they make the subject of cohesion irrelevant?
Posted by kesler12 at 22:47 2 comments:

Hours after the mass shooting in las vegas, when many facts are still unknown, we can already notice a narrative beginning to take shape in the leftist media. There are energetic and widespread calls for gun control. As always, the liberals are using tragedy to push their anti-gun agenda. They never grasp the fact that this is a settled question in the united states: Regardless of how many mass shootings take place, they do not invalidate the 2nd amendment. We already learned the folly of trading freedom for security after the september 11 attacks and the patriot act. The liberals are attempting ram their policys through while the public is still in a state of shock and unable to respond logically. They push the idea that more gun laws would have prevented the atrocity, even though the shooter must have violated dozens of laws to carry out his vile deed. We need to keep an eye out for politicians who act too quickly in the wake of this mass shooting. There are treacherous elements within america who want to see the country turned into an anologue of europe: A dumbed down populace infiltrated by muslims and communists, that has been disarmed mentally and physically.

The timing of this event is certainly unfortunate, as it comes at a time when the fake 'refugee crisis' was showing signs of beginning to unravel. The narrative was crumbling under sustained attack from independent media, who were able to prove that non-government organisations (NGOs) like Save The Children and Support Refugees were engaged in illegal human trafficking. For obvious reasons, mass immigration of 3rd worlders is a bigger threat to civilisation than a few mass shootings. We have to remember to keep our eye on the ball and not get distracted by sensational tragedys. The most important thing to do at this point is to compile video archives of the event and compare them all for mutual consistency. This will allow us to verify whether the shooting was indeed done by 'just a lone nut' (TM). It will also allow us to determine whether or not there are anomolous events which are being ignored by the mainstream media.

Sen. Murphy Tells Congress to ‘Get Off Its Ass’ on Gun Control